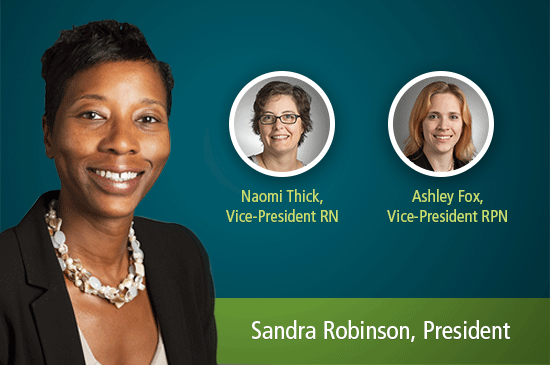 Robinson is the manager of several outpatient and ambulatory programs at Toronto Western Hospital.

Council elected Naomi Thick, RN, to the position of Vice-President RN. Thick is a clinical manager in the Hematology and Oncology program at the Children's Hospital of Eastern Ontario (CHEO). She has been a member of Council since 2017, and this is her first term on Council’s Executive Committee.

Council also re-elected Ashley Fox, RPN, as Vice-President RPN for a second term. Fox, who is a community outreach coordinator and nurse case manager with Promyse Home Care in Kitchener-Waterloo, has been a member of Council since 2015.

Examining the evidence, improving our processes

Our 2019 Annual Report, Innovating with Evidence, is out now!

The report highlights some of the ways CNO has used evidence over the last year to improve its processes and better protect the public.

The report focuses on three of our key accomplishments in 2019: reducing risk, putting patient safety first and good governance.

It’s rare but real: some health care providers do set out to harm patients. To find out why this happens and how to prevent it, we conducted extensive literature reviews about health care serial killers, sexual abuse and other forms of harm. We used this evidence to develop interventions to detect nurses who hurt patients — and prevent this from happening. Now stakeholders in Canada and beyond are looking to us to learn more, and we’re taking every opportunity to share this information.

Where to find our COVID-19 practice resources

This is an unprecedented time in health care, and nurses across the province continue to demonstrate leadership in patient care.

Since March, we’ve been updating our COVID-19 Practice Resources page with answers to your COVID-19-related nursing practice questions.

read more
Back to Top